Join Arts for LA for a Town Hall Meeting on Monday, April 3, at the Aratani Theatre at the Japanese American Cultural and Community Center in Little Tokyo. 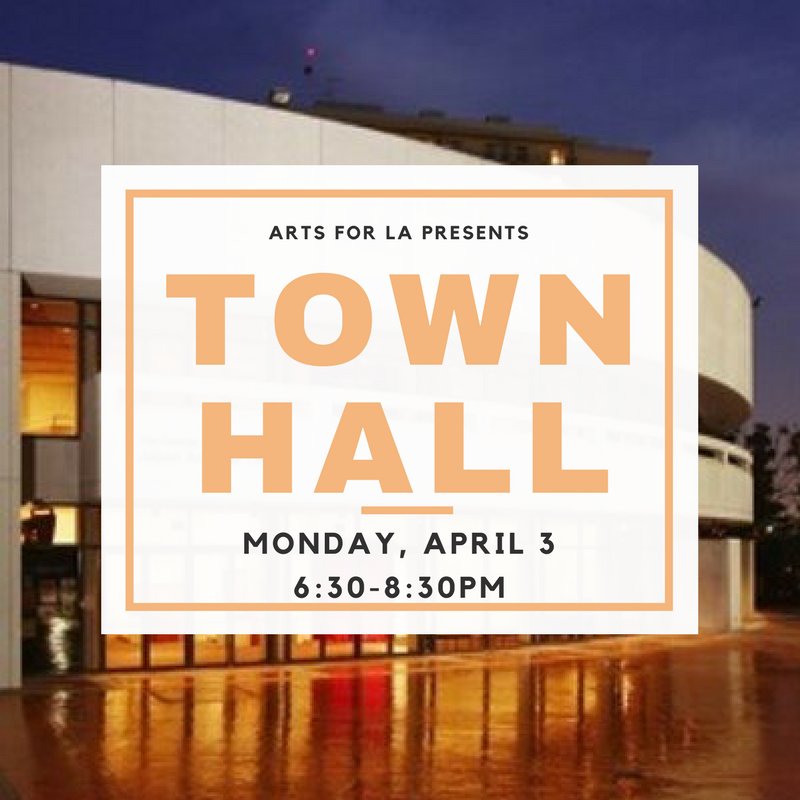 The focus of the Town Hall Meeting is the political moment we’re facing and what’s happening at the local level.  Featuring a range of speakers representing different sectors (immigration, health care, education, LGBTQ rights), the goal is to engage artists and arts professionals in local opportunities and coalitions in which to demonstrate their civic engagement and cross-sector collaboration on the issues and challenges we face.

Attendance is free, but an RSVP is requested.

Ahilan Arulanantham, Director of Advocacy/Legal Director at the ACLU of Southern California

ArtsMonth: Town Hall Meeting is sponsored in part by the City of Los Angeles Department of Cultural Affairs (DCA), the Los Angeles County Arts Commission, the Center for Cultural Innovation, and the Japanese American Cultural and Community Center.

Ahilan T. Arulanantham is the Advocacy and Legal Director at the ACLU of Southern California. He has successfully litigated a number of cases involving immigrants’ rights, national security, and related issues. In 2007 and 2013, he was named one of California Lawyer Magazine’s Lawyers of the Year for immigrants’ rights, and was named one of the Daily Journal’s Top 100 Lawyers in California from 2007-2009 and again from 2012-2015.  Ahilan has testified before the United States Congress on three occasions, on both national security and immigrants’ rights issues. He has also argued before the United States Supreme Court in a case involving immigrants’ rights issues. Prior to joining the ACLU in Los Angeles, Ahilan worked was an Assistant Federal Public Defender in El Paso, Texas for two years.  Before that he was an EJW fellow at the ACLU Immigrants' Rights Project in New York and a law clerk on the United States Court of Appeals for the Ninth Circuit for the Honorable Stephen Reinhardt. He is a graduate of Yale Law School, Lincoln College, Oxford (which he attended as a Marshall Scholar), and Georgetown University. In 2016 Ahilan received a MacArthur Foundation Fellowship.

Betsy Butler has been fighting for equality and justice throughout her career. She currently serves as the Executive Director for the California Women’s Law Center where she helps break down barriers and advance the potential of women and girls through transformative litigation, policy advocacy and education. Prior to joining the Law Center, Betsy served in the California State Assembly, representing the 53rd Assembly District, which covered coastal Los Angeles. During her tenure in the legislature, Betsy prioritized bills addressing the needs of veterans, older Americans, working families, the environment and consumer rights. Committed to those who have served our country, Betsy was honored to be named the 2011 Legislator of the Year by the Vietnam Veterans of America and the 2012 Legislator of the Year by the American Veterans (AMVETS). She began her career in public service with Lt. Governor Leo McCarthy and was an appointee of President Bill Clinton in the International Trade Administration at the U.S. Department of Commerce in Washington, D.C. Betsy graduated from San Diego State University and from the Executive Program in Management at UCLA.

Bill Davis (moderator) is the founding president of Southern California Public Radio, a California-controlled subsidiary of the American Public Media Group. He joined SCPR in January 2001, and prior to his appointment was senior vice president for programming at National Public Radio (NPR) in Washington, D.C. where he directed NPR’s programming divisions: news, cultural programming, new media, and satellite. For ten years, he served as general manager of WUNC-FM in Chapel Hill, NC where he directed all aspects of this NPR affiliated station licensed to the University of North Carolina, making it one of the nation’s most-listened-to NPR stations. Prior to joining WUNC, he managed WBFO-FM in Buffalo, NY, and KALX-FM in Berkeley, CA. Mr. Davis earned the AB from Occidental College in Los Angeles, the MJ from the Graduate School of Journalism at UC Berkeley, and the MBA from the Kenan-Flagler School of Business at UNC-Chapel Hill. While in journalism school, he produced and edited reports for the statewide news operation at California Public Radio.

As a staff attorney at the National Immigration Law Center, Mayra Joachin focuses on improving access to affordable health care coverage for uninsured immigrants. She engages in policy analysis, consumer advocacy, direct work with affected individuals, and impact litigation to advocate for improved access to health care. Before joining NILC as a Columbia Law Social Justice Fellow in 2015, Ms. Joachin interned at the Public Law Center’s Immigration Unit and was a judicial extern for Judge Denny Chin of the United States Court of Appeals for the Second Circuit. Her passion for immigrants’ rights advocacy stems from her experiences as a Salvadoran immigrant. Ms. Joachin holds a bachelor’s degree from the University of California, Los Angeles, and a juris doctor from Columbia Law School.

Dan Kitowski is Director of Health Services-Western Region with The Actors Fund, a national non-profit that helps all performing arts and entertainment professionals in times of need, crisis or transition. For the last four years, he has managed grant funding from Covered California providing outreach, education and enrollment support to the visual and performing arts community across the state. Prior to his ten years at The Actors Fund, Dan worked at Cedars-Sinai Medical Center as a coordinator of the in-patient AIDS program, as well as manager of the Department of Social Work at University of Michigan Medical Center.

Center where she is developing a leading LGBT policy department at the largest LGBT organization.  In this capacity, Slavin oversees and works closely with the policy team on a range of issues including advancing LGBT civil and human rights, which includes defending against anti-transgender initiatives, as well as advocating on health, international, youth, seniors, and anti-violence related policy matters pertaining to the LGBT community.  Prior to this position, Slavin was the Center’s Lead Staff Attorney where she was responsible for overseeing the delivery of comprehensive and holistic legal services for LGBT survivors of domestic and sexual violence.  Slavin was a leader in the efforts to obtain the first ever non-discrimination provisions in federal law on the basis of sexual orientation and gender identity in 2013 as part of the re-authorization of the Violence Against Women Act, and in 2015, Slavin received the Los Angeles County Betty Fisher Award for phenomenal leadership in the field of domestic violence. Slavin graduated from Northeastern University School of Law.