An evening with Roman Mars and Helen Zaltzman

On Friday, April 14, for one night only, podcasters Roman Mars of 99% Invisible and Helen Zaltzman of The Allusionist are joining forces to drown out grim reality with a live extravaganza of educational entertainment. Edutainment? Entercation? We’ll find out on the night. All proceeds will benefit Arts for LA.

“[The Allusionist] is filled with good humor and a great deal of levity to make one of the funniest and educational podcasts around.” — The Guardian

Online ticket sales have ended; there is a limited number of seats available to purchase at the box office.

Roman Mars is the host and creator of 99% Invisible, a short radio show about design and architecture. With over 170 million downloads, the 99% Invisible podcast is one of the most popular podcasts in the world. Fast Company named him one of the 100 Most Creative People in 2013. He was a TED main stage speaker in 2015. It is currently the most popular Ted Talk about design with over 4 million views. His crowd funding campaigns have raised over $2 million, making him the highest-funded journalist in Kickstarter history. He is also a co-founder of Radiotopia, a collective of ground-breaking story-driven podcasts.

Helen Zaltzman is a multiple award-winning podcaster, working out of her home in London. The Allusionist, the first show created especially for Radiotopia, weaves wry entertainment out of how humans use language. Her comedy podcast, Answer Me This, recently celebrated its tenth birthday. 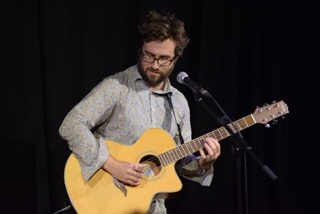 Music by Martin Zaltz Austwick, a musician, podcaster and academic. He has released albums as The Sound of the Ladies, Martin Austwick, Dr. Martin Austwick, and Existential Meltdown, and has contributed music to The Allusionist, The Beef and Dairy Network, and Getting Better Acquainted, and podcasts with Answer Me This!, Song by Song, and The Global Lab.