On Tuesday, April 10, the City of Santa Monica hosted ArtsDay Santa Monica! The theme of the event was an Ode to Arts & Culture in Santa Monica, and featured performances by Santa Monica based artists Luis Alfaro, Dan Kwong, and singer/songwriter Julia Paymer of Downbeat 720. We particularly loved the beautiful ArtsDay Proclamation, written by poet Luis Alfaro!

Read the Proclamation below: 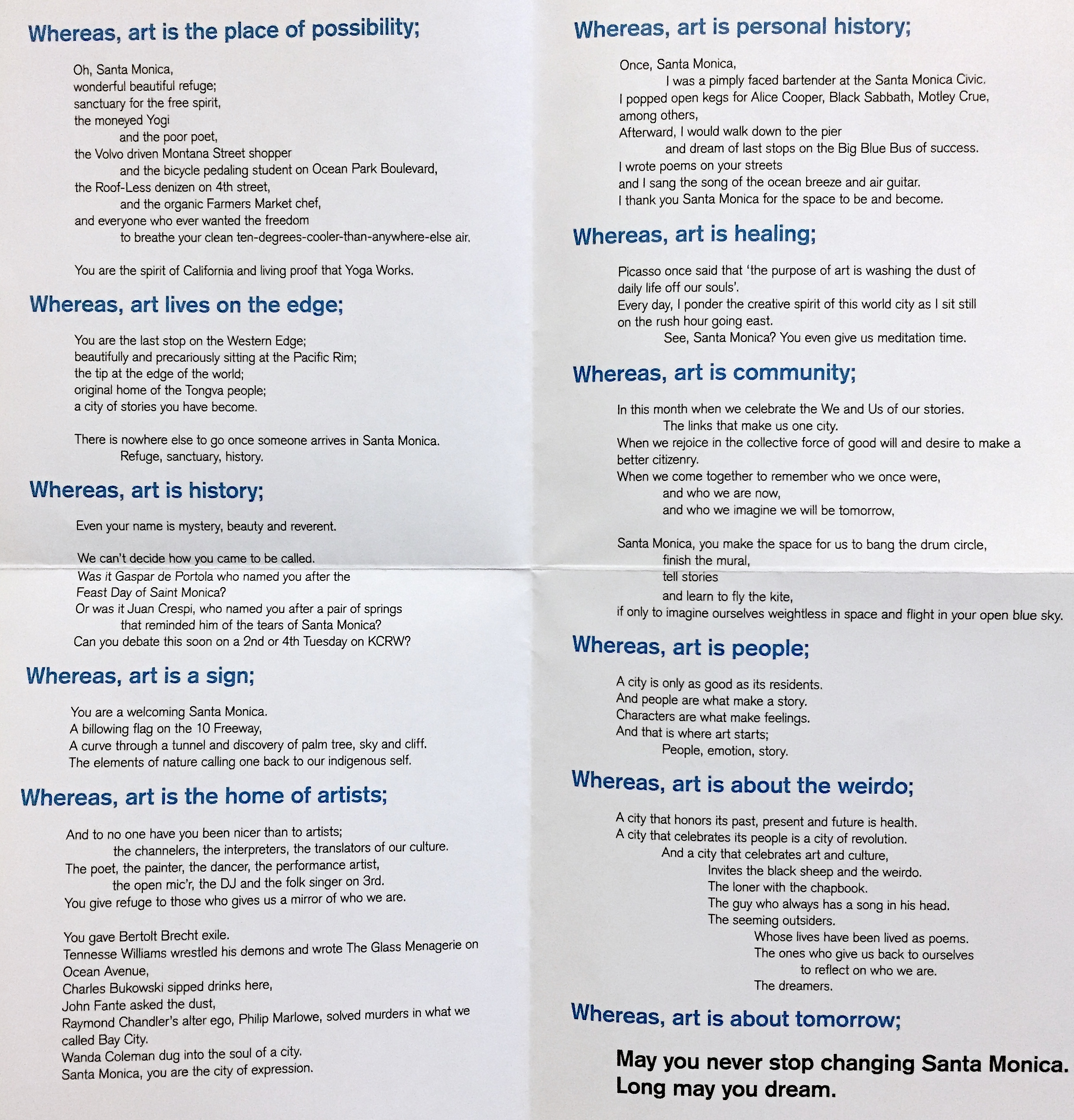 Are you a regular on our Job Listings page? Now you can get updates on new job listings as soon as they're posted by following @arts4la on Instagram!

We post new listings in our insta story daily -- it's a quick and easy way to stay updated on the go! No more hitting refresh and waiting around! 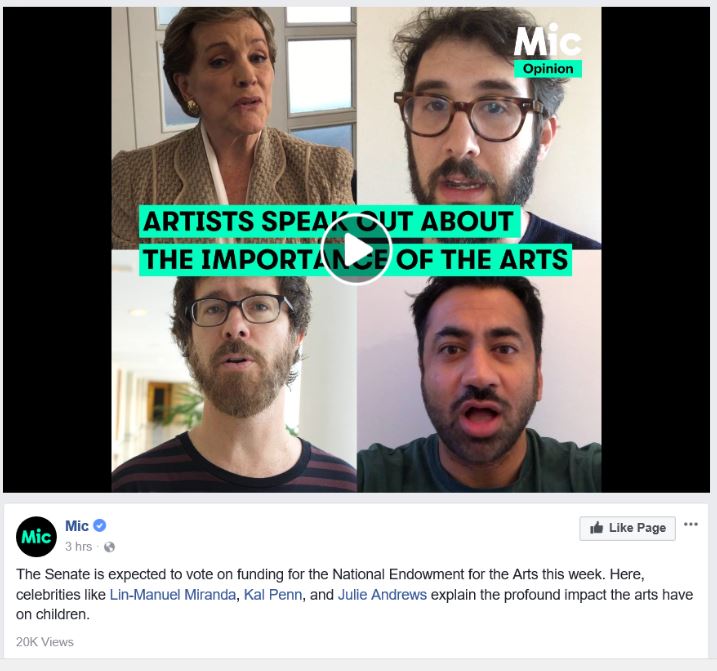 A new study identifies a uniquely effective way to impart this foundational knowledge: immersion in the arts.

The results "support the broad educational value of the arts," writes a research team led by psychologist Eleanor Brown of West Chester University. "Our findings indicate that the arts may hold value not only for art's sake, but also for advancing children's overall school readiness."

Read the full article from the Pacific Standard Magazine

There's More Arts Education than You Might Expect, But Not For Everyone

Read or listen to the full KPCC piece HERE.

More arts education is being offered to more students than previously assumed – 89.6 percent of elementary schools–and 92.7 percent of secondary schools–offer at least some arts instruction during the school day to students.

The findings were surprising to many advocates, given a common perception that the arts are often the first to go when schools have limited funds.

"We now know with the data that is not the case," said Denise Grande, head of the LA County Arts Ed Collective. "If every parent or every stakeholder looks at what's happening in their neighborhood school, they can walk in from a place of strength and say, 'There are lots of other schools in our district that are doing this well. Let's look at those schools for examples of how that work can happen for my children in my school.'"

While the study didn't look into causes for the unexpectedly high number of arts education offerings, Grande said she thinks efforts by schools and districts to increase their arts offerings likely played a part.

"Some districts cut the arts. Many others did not," Grande explained. "And in the middle of that is this idea that over the past five years many districts have been working hard to increase what [arts instruction] was already in place."

Another possible explanation, according to Grande: increases in funding.

"We know that as more money has been flowing into the school system since Proposition 30 [a ballot measure that sent money to public schools]," Grande said. "Districts are continuing to look for ways to increase arts education."

While the survey demonstrated a surprisingly high level of arts instruction happening in LA County schools, there's still work to do.

The Los Angeles County Arts Commission releases findings from a 18-month survey of arts education in K-12 public schools. The Arts Ed Profile was administered to all 2,277 schools across LA County, including 81 districts, four charter school networks as well as a few individual charter schools.

Virtual reality, graffiti, and other ideas to expand arts instruction

LISTEN TO THE FULL STORY HERE

California law requires schools to offer arts instruction from first to 12th grade. But, in practice, not all students are getting equitable access to arts education.

So the Los Angeles County Arts Education Collective is trying a new approach: forming an Arts Ed Innovation Lab, and working with stakeholders to create prototypes – small but scalable projects that creatively increase access to arts education for more, and ideally all, students.

​"We launched the Arts Education Innovation Lab with this idea of really rethinking, 'What is it going to take to really get us to scale in arts education so that arts education doesn't continue to just be for some kids in some classrooms in some schools in some parts of the county," Los Angeles County Arts Commission director of arts education Denise Grande told the group of over 40 gathered for the Innovation Lab's Boot Camp.

The over 15 prototypes supported by the Arts Ed Innovation Lab center on five main "pillars":

One prototype aims to create a mobile graffiti yard for budding street artists.

Another, called "El VAPA Access," would focus on middle school students by "redefining the designated EL class" – or English learners – "to be VAPA-driven" – meaning, motivated by the visual and performing arts.

"We take the VAPA teacher at the middle school and have them provide the designated EL class," Orange County Department of Education VAPA coordinator Steve Venz explained to the group.

Some of the prototypes even include ideas from outside of the arts and education worlds. For example, "Virtual Reality Arts Ed to Experience Self as Artist" aims to use VR technology to bring students places where they couldn't go physically, like "performing onstage with the ancient Greeks" or "painting in Picasso’s studio."

"Arts Playground" would provide creative spaces and supplies in places like public parks, borrowing from the model of public swimming pools.

Kaz Matamura came to prototype boot camp with her program, called "Speak Up Now!" She wants to teach students public speaking skills, and sometimes she uses theater games to do it. She says she went to boot camp because she wanted to find people who could help her bring her program to more students, and to learn from their expertise.

"To me, it's like being in a creative candy store," she explained. "So, I'm just taking a lot of recipes."

FOCUSING on the arts at local, state, and national levels;

ENCOURAGING individuals and organizations to participate in the arts;

ALLOWING governments and businesses to show their support of the arts; and

RAISING public awareness about the role the arts and humanities play in our communities and lives.

Arts and Sciences Cities of Distinction Awarded to the DCA!

The City of Los Angeles Department of Cultural Affairs (DCA) will receive the Arts & Sciences Cities of Distinction Award from the Phi Beta Kappa Society in recognition of the quality, depth, range, and vibrancy of its community engagement with the arts and sciences.

"Los Angeles is the creative capital of the world, so culture isn't an afterthought for us - it's part of who we are, and it's essential to the health and happiness of our people," said Mayor Eric Garcetti. "Art has the extraordinary power to transform perceptions, attitudes, and behaviors, especially when it lives in places that are accessible to everyone."

As the nation's most prestigious academic honor society, Phi Beta Kappa is best known for inducting outstanding undergraduate students across the nation. It launched the Arts & Sciences Cities of Distinction Award in 2016 to spotlight cities or metropolitan regions for their exceptional artistic vitality, cultural vibrancy, and scientific engagement. Previous recipients of this award include the cities of Chicago, Portland, Oregon, and Atlanta.